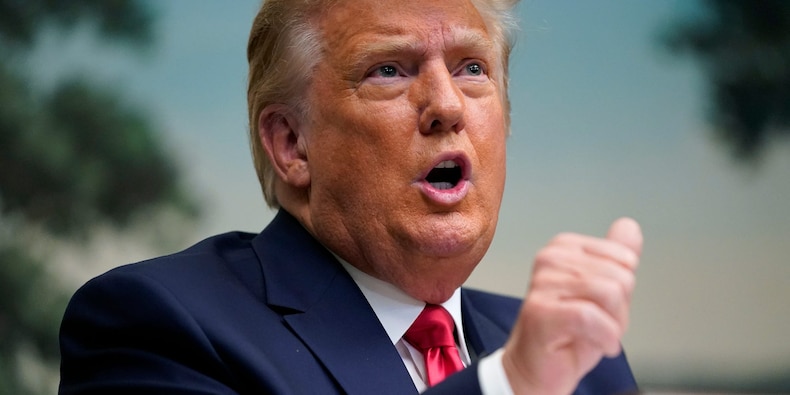 President Donald Trump has less than two months left in office — and he’s been largely absent from new coronavirus relief negotiations on Capitol Hill at a precarious moment for the American economy. The recent spike of coronavirus cases is threatening to set back a recovery that still has a long way to go.

Throughout October, Trump called on lawmakers to approve an economic-rescue package in numerous tweets and media interviews. He even suggested he could back a much bigger aid plan than Democrats. But House Democrats and the White House failed to strike a deal in negotiations on a $2 trillion assistance package unlikely to draw support from many GOP senators.

Trump has largely fallen silent on the issue since his election loss to President-elect Joe Biden. The president tweeted about it only once in November, urging Congress to pass a “big and focused” rescue plan. Instead, he spent the month making baseless accusations of voter fraud and tried challenging the election outcome, which was virtually guaranteed to fall flat due to the lack of evidence supporting his claims.

As Biden gears up to assume the presidency in January, Trump’s sway among Republican senators on passing relief legislation may be very limited in the few weeks left in the congressional lame-duck session.

“The president’s leverage on the stimulus has never been lower than it is now,” Brian Riedl, an economist at the right-leaning Manhattan Institute in touch with several GOP congressional offices, told Business Insider. “Senate Republicans strongly rejected the president’s price tag even before he lost the election.”

The White House has put Senate Majority Leader Mitch McConnell in the driver’s seat to shape another aid plan last month. On Tuesday, the Kentucky senator circulated a slim relief package which omitted federal unemployment benefits and directed the bulk of its spending toward small business aid.

“At this point, Senate Republicans are driving the GOP train on this right now,” Riedl said. “Their only real focus is likely to be whether the president will sign what they send him.”

Indeed, it appears the new Republican proposal has the president’s support. Treasury Secretary Steven Mnuchin told reporters on Wednesday “the president will sign the McConnell proposal that he put forward yesterday.”

Read more: Shelby Osborne achieved financial freedom using a unique twist on a classic real-estate investment strategy. Here’s how she built a portfolio of 53 units, starting in her early 20s.

Republican senators and the growing deficit

Trump’s pitch for an expansive rescue package failed to draw backing from many Senate Republican. His instinct to spend big clashed with GOP concerns about the rising budget deficit. It hit $3.1 trillion for fiscal year 2020.

Most of it was the product of emergency federal programs that Congress enacted in the spring, though Trump presided over a swelling deficit with spending increases in 2018 and corporate tax cuts the year before. Most economists say concerns about the deficit and debt should be set aside to confront the economic and health crises.

Over the summer, GOP senators never coalesced around a $1 trillion plan initially pushed by McConnell given the strong resistance it generated in their ranks. Relief talks over the fall between Speaker Nancy Pelosi and Mnuchin also spawned opposition among Republicans as the price tags under consideration steadily grew.

“We’ve got to understand that we’ve got to get our fiscal house in order,” GOP Sen. Rick Scott of Florida told CNBC in late October. “We can’t be wasting your money, somebody is going to have to pay for this.”

Stephen Moore, an outside economic advisor to Trump, said in an interview that Trump may be trying to preserve his economic record ahead of a possible second presidential run.

“It looks now that Biden is going to be the president in January. At this point, does Donald Trump really want his last major act of his presidency to be a trillion dollar debt bill?” Moore said. “When he runs again in 2024, he doesn’t want to be seen as the guy who just massively increased the national debt for no good reason.”

“It’s essential that we move with urgency,” Janet Yellen said in her first speech as Biden’s nominee for Treasury secretary. “Inaction will produce a self-reinforcing downturn causing yet more devastation.”

Read more: Dennis Lynch has tripled his clients’ money since 2010. The star fund manager shares 5 bets he’s seizing on for 2021 and beyond — and explains how he avoids making costly investing decisions.