Google announced it has made a number of upgrades to Google Assistant so that the artificial intelligence-powered virtual assistant no longer mispronounces people’s names, especially those that are less common, and can better understand the context of conversations.

Users can now teach Google Assistant to enunciate and recognise the names of their contacts, by listening to a user pronounce them. Google assured its Assistant would not keep a recording of user voices.

The feature is initially available in English, but Google says it plans to expand it in other languages “soon”.

Google added it rebuilt Assistant’s natural language learning models and improved its reference resolution using its BERT machine learning model, so it can process words in relation to one another in a sentence, instead of one-by-one in order.

The company noted in a blog post that making those changes means Assistant can understand context and respond “nearly 100% accurately”. The first features the improvement will apply to are alarm and timer tasks on Google smart speakers in English in the US, with plans to bring the capability to other uses cases and expand it to phones and smart displays.

“Assistant’s timers are a popular tool … you might fumble and stop mid-sentence to correct how long the timer should be set for, or maybe you don’t use the exact same phrase to cancel it as you did to create it. Like in any conversation, context matters and Assistant needs to be flexible enough to understand what you’re referring to when you ask for help,” Google said.

The tech giant has also used AI as part of study to see if technology could be used to help non-specialist clinicians, such as nurses, improve the accuracy of diagnosis and treatment of skin conditions.

As part of the study, which was published in JAMA Network Open, 40 non-specialist clinicians interpreted over 1,000 de-identified images of patients’ skin conditions from a telemedicine dermatology service, identified the condition, and made recommendations. For half of the cases, the clinicians had access to the AI tool, while the other half didn’t.

The results showed that using the AI tool, clinicians improved their ability to interpret skin conditions and arrived at the same conclusion as the diagnosis of dermatologists.

“The chances of identifying the correct top condition improved by more than 20% on a relative basis, though the degree of improvement varied by the individual,” Google said about the study.

Elsewhere within Google, the company’s Android earthquake detection system that was announced in August is now available in New Zealand and Greece. At the time of launch, Google only made the earthquake alert available to Android users in California but said there were plans to roll it out to other parts of the US and other countries.

The system relies on the accelerometers that are built into smartphones to detect signals for earthquakes.

If the phone detects an earthquake, it will send a signal to Google’s earthquake detection server, along with a course location of where the tremor occurred. The server will then combine the information it has received from multiple Android phones to figure out if an earthquake is happening.

Eventually, if an earthquake is detected, the system will automatically send warning alerts to Android devices so people can find cover or safer ground.

The company has also made updates to Search, pre-empting that the frequency of international travel will increase. It has introduced a feature to notify users when they search for travel information such as flights, hotels, or things to do, they are also provided access to COVID-19 related travel advisories or restrictions.

Information could include whether travellers will need to quarantine on arrival or provide proof of immunisation records or test results, as well as when restrictions are added, lifted, or reduced, Google said.

The updates are country-specific, while state-specific information is available in the US.

Other travel-related updates that Google has made include enabling Maps to make pit stop suggestions for road trips and allow people to use Explore to browse destinations based on interest filters such as outdoors, beaches, or skiing.

Google added it rebuilt Assistant’s natural language learning models and improved its reference resolution using its BERT machine learning model, so it can process words in relation to one another in a sentence, instead of one-by-one in order.

Samsung tried to get customers excited. Then the lawyers spoiled it all

AI that stops you getting mad at your customers? Are you crazy?

Android has a useful hidden feature that the iPhone doesn’t.

Ever handed your iPhone to someone and then remembered that one thing that you don’t want them to see?

Maybe a photo, or a test, a personal message, something private from work, or your stash of cat memes you’re collecting.

Whatever it is, we carry a lot of sensitive stuff on out smartphones, and it’s only natural to what to keep that stuff private.

But the developers who work on Android have thought about this, and added a feature that allows you to be able to hand your phone to someone else, while keeping your information private.

This popped into my head the other day following a conversation with an Android user who said they wished there was a way to lock their private data but still allow others to make calls and use the internet.

That’s what this mode does.

Guest mode creates a temporary account on your smartphone that is free from any of your personal information. No photos. No contacts. No messages. No files.

It also disables the phone feature, but you can choose to activate that if you want.

So, how do you access this feature? Well, it normally lives at Settings > System > Advanced > Multiple Users, but not always. If you can’t find it, a search for users should bring it up. 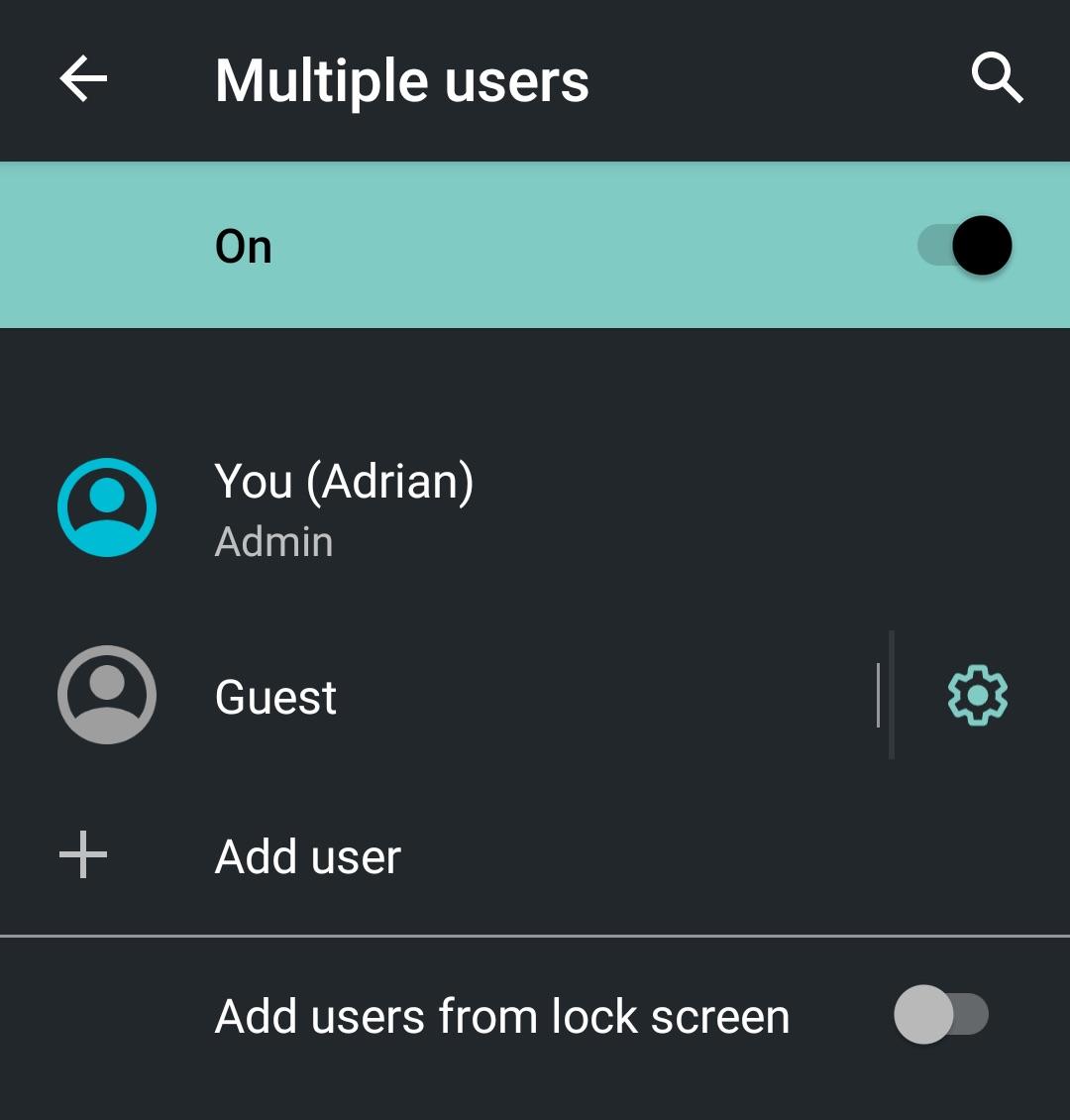 When you find it, you’ll see it at the bottom of the list of Google accounts tied to the handset. To switch, tap on it, and the handset will switch over.

The process is fast and only takes a few seconds.

To switch back, navigate back to Multiple Users and tap Remove Guest.

If you want to give the Guest Mode access to the phone, before going into Guest, click on the cog next to it and enable Turn on phone calls.

Also, for quick access, you can make this feature available from the lock screen. Handy if you use it regularly.

Cisco said the Sedona NetFusion platform is the first to deliver complete network abstraction and control.

Cisco announced on Tuesday that it was acquiring Hierarchical Controller market leader Sedonasys Systems in an effort to beef up its multi-vendor, multi-domain automation, and software-defined networking offerings.

Kevin Wollenweber, vice president of product management in the Service Provider Network Systems for Cisco, explained in a blog post that in order to expand the internet and operate networks at massive scale for the billions of new users coming down the pipeline, the internet had to be reinvented in certain ways.

Cisco is acquiring Sedonasys Systems primarily for its NetFusion platform, which has a Hierarchical Controller (HCO) that it said, “enables multi-vendor, multi-domain automation, and software-defined networking.”

Wollenweber said the Sedona NetFusion platform was the first company to offer “complete network abstraction and control” that helped CSPs manage their networks across a variety of domains, vendors, layers, and technologies, all as one single network.

“HCO is the brain that enables transformation like 5G network slicing, routed optical networking, and disaggregation. We have one simple goal in our network automation strategy — simplification,” Wollenweber said.

“Now, CSPs can gain real-time, dynamic, and seamless control of IP and optical multi-vendor networks together. They can quickly move from clunky, manual operations across siloed teams and technologies to a completely automated and assured network that’s easily managed through a single pane of glass.”

With Cisco Crosswork and Sedona NetFusion, users will have access to a real-time replica of the entire network to predictively manage any changes to the deployment, connectivity, and activation status of all network inventory.

Operators can preview optimization, assurance, and changes, and then commit them as needed, Wollenweber added.

Colonial Pipeline, which accounts for 45% of the East Coast’s fuel, said it has shut down its operations due to a cyberattack.

The attack highlights how ransomware and other cyberattacks are increasingly a threat to real-world infrastructure. The company delivers refined petroleum products such as gasoline, diesel, jet fuel, home heating oil and fuel for the U.S. Military.

In a statement, Colonial Pipeline said:

On May 7, the Colonial Pipeline Company learned it was the victim of a cybersecurity attack. In response, we proactively took certain systems offline to contain the threat, which has temporarily halted all pipeline operations, and affected some of our IT systems. Upon learning of the issue, a leading, third-party cybersecurity firm was engaged, and they have already launched an investigation into the nature and scope of this incident, which is ongoing. We have contacted law enforcement and other federal agencies.

Colonial Pipeline is taking steps to understand and resolve this issue. At this time, our primary focus is the safe and efficient restoration of our service and our efforts to return to normal operation. This process is already underway, and we are working diligently to address this matter and to minimize disruption to our customers and those who rely on Colonial Pipeline.

Here’s a look at the Colonial Pipeline system affected by the cyberattack. Colonial Pipeline’s shutdown should it continue may lead to supply shortages since it covers so much territory in the US.